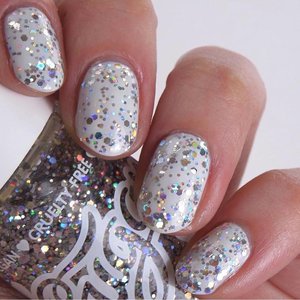 I picked up three of Sugarpill's nail lacquer's at IMATS last year before they were officially released. Mostly because I'm a Sugarpill fan and because they were exclusive since they weren't released yet. If you are familiar with the indie nail polish scene then most of these shades won't be so unique to you, and I completely agree. However I wanted to try them out. I was pleasantly surprised when I recently used Electric Halo. It is a chunky holographic glitter topper, which isn't all that unique BUT the glitter payoff and the amount of holo sparkle is just perfect. It was easy to apply without too much pushing of glitter placement and without being flooded by clear base. I love it so much as a topper and would probably be amazing for full coverage if you sponge it on. My favorite pairing was with OPI My Boyfriend Scales Walls as a base color.

I love my Tipsy

Tispy was my first loose shadow from Sugarpill. I have the Burning Heart palette and was so impressed I decided to give the loose shadows a try. Now I think I am ever more in love with the loose shadows! Tipsy is a GORGEOUS well pigmented green that blends so easily and makes my brown eyes pop. I look forward to trying out more!

Devious Nature is one of my favorite pinks I own in my nail polish collection and thats saying a lot! Formula is well pigmented and creamy leaving you with a simple but gorgeous medium shade of pink.

Gorgeous cool toned grayed out lavender with subtle silver shimmer! I think this was the very first Cult Nails polish produced, so if you're becoming a Cultie I highly recommend adding this to your collection!

I was so happy when Essie started churning out more interesting colors within the past few years. I used to pass by Essie without a glance because it was always light pinks and nudes. Now I love Essie! In my opinion Essie consistently has the best cream formula.

I have the Burning Heart palette and it was my very first Sugarpill cosmetics. I absolutely loved the palette for the autumn, every color is super pigmented and easy to blend. I was most impressed by the red because I've never tried a red shadow that was truly red like this one. I ended up purchasing the Heart Breaker palette as a gift for a friend for Christmas...which needs to come quick so I don't end up keeping it for myself!

I love shadow insurance! I've been using it for a few years now and very rarely stray away from it. It never creases, lasts all day and makes a huge difference in the pigmentation of my shadows. The price isn't all that bad either because the tube lasts a really long time, definitely getting your moneys worth.