Maybelline's Dream Bouncy Blush's unique bouncy texture gives you the freshest flush ever! The revolutionary powder-gel formula is lightweight like a powder, yet it melts seamlessly into skin like a cream, for a sheer wash of bouncy-fresh color that lasts! 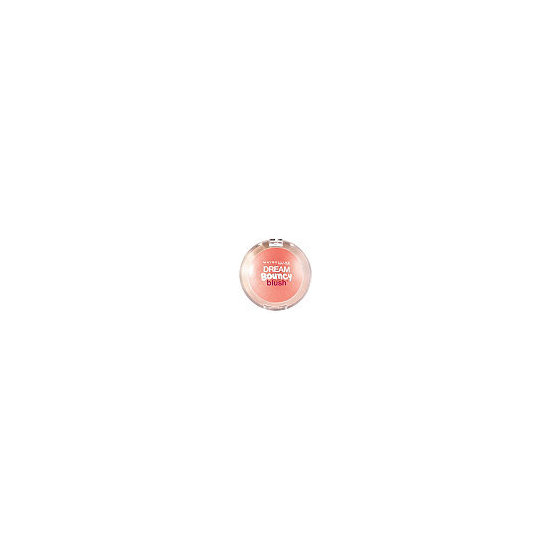 It is used up very fast and it is smushed down and rubbed around. I will not repurchase this, the color payoff is not very good, but I love the light feel of this blush. 👎

I really didn't like it. Hard to apply even with fingers. And doesnt show up on my deep skin tone. Waste of money. At least it didn't break me out or anything. there is always that!

I bought a couple shades of this blush a couple months ago, hoping that it would be nice, creamy, and add a nice summer glow to my face. However, i am sort of disappointed with the results, the staying powder is not good and the color isn't vibrant. I'm not a fan, and I won't be buying anymore... maybe it's just my skin color they won't show up on well. I do have a red tint to my skin.

I couldn't wait to get my hands on this blush since I first saw it on YouTube. I have been obsessed with cream and mousse blushes lately so I couldn't wait to try this! I put it on as soon as I got into the car! lol I absoulety love Candy Coral, it gives my cheeks a beautiful natural flush of color :) I will definitely be buying more shades.

Maybelline's Dream Bouncy Blushes are cream blushes with a gel formula. They're meant to feel "light like a powder, yet melt into the skin like a cream". This product comes in 10 different colors. Maybelline products are tested on animals. This blush was made in Korea. This line of blushes is dermatologist and allergist tested, and is non-comedogenic. I purchased my Bouncy Blush at Ulta for $7.99 for 5.9 or .19oz of product. Packaging for the Dream Bouncy Blushes is too plain. For a product with a cute, playful name, I think Maybelline could've done better than a tan pan with clear lid. The logo is cute, but once again, Maybelline could've done better than just white. Why not aqua or yellow, they would've stood out more against the pink blushes. I mean, even my mum thinks this is a packaging failure. Maybelline's Dream Bouncy Blushes have a unique texture, but I don't think "bouncy" is the write word to describe it. If they were actually bouncy, they'd spring back after you touched them, instead of just moving around. I think "squishy" would be a better descriptor, but "Dream Squishy Blushes" doesn't really have a ring to it. The texture of these blushes is soft and malleable, and really really fun to play with. Bouncy Blushes are meant to be applied and blended with your fingers. I use two fingers to pat the top of the product, and three fingers to blend it across the cheeks, in sweeping, semi-circular motions. The soft texture of these blushes makes them really easy to blend. Of course you can use a brush to apply these, if its dense enough and made of firm, synthetic fibers, but I prefer the results when blended with fingers. The coverage of this blush is really sheer, but buildable. It annoys me when people complain about them being sheer because they're supposed to be that way. Maybelline's website says so. How about doing some research before buying a product, or complaining about it? These blushes can be built up to have more color, worn sheerly for just a bit of dewy color, or layered under powder blushes. I like how Candy Coral looks with ELF's Natural Radiance Blush in Glow dusted over it. See swatches here. Candy Coral is a pretty coral that leans mostly pink with just hints of orange. It dries down to a satiny, dewy finish that gives you the look of a natural, glowing flush. It's a pretty effect. Candy Coral isn't the most flattering color for me, cause its a bit too warm. It might look better on me in spring and summer. The wear time for Dream Bouncy Blushes is poor. I only get about two to three hours of wear before Candy Coral fades away to almost nothing. It doesn't even get me through my short work days. I'd like to get at least six hours of wear from these, which you could probably get via layering, but on its own, Bouncy Blushes just can't stay put. To be honest, I kinda agree with everyone who says that Maybelline's Bouncy Blushes are gimmicky, novelty products. Now that I've reviewed it, once I get tired of squishing it around in the pan, I probably won't wear Candy Coral very often. The texture is fun and interesting, but that doesn't make up for the wear time failure. I can't complain about lack of pigmentation, because that's how this product is meant to function. I find the price tag a little bit too high for the amount of product you get. I'd like to see this more in the area of $5-6, instead of $8. I'd suggest getting these on sale if you really want them. If Maybelline tweaked the formulation slightly, these would be a much better product. I won't be repurchasing this shade, nor trying any other. I only recommend Maybelline's Dream Bouncy Blushes if you're really curious about the texture, if you like layering blushes, or if you want a super subtle, natural, glowy blush without much color pay off.