Application: To be applied on dry clean lips. For a natural shine effect: using the exclusive applicator, apply one coat on the centre of the lips and brush towards the outer corners then reverse the movement. For More Coverage and Sophistication: Make sure the first coat fuses perfectly with the skin before applying the second coat. (20 seconds) using the outer curved side, delicately apply the texture on top of the first coat. Tip: use the pointed tip for high precision. 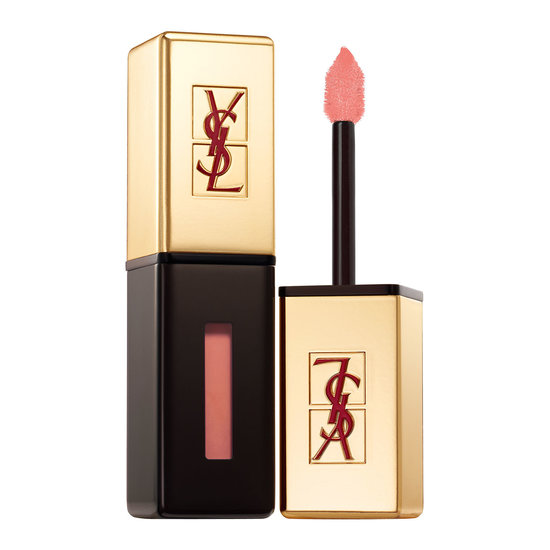 My favourite thing about this range of products (can't list a shade: I own 5!!!) is the gloss finish on them. It's a really subtle, not gloopy, natural kind of glossy sheen. It also lasts ridiiiiiculously long without being shiney. So I use these colours over top of my lipsticks a lot to get a bit of a natural shine that will stay all day. I find it makes my lipstick last a lot longer.

But ya, like some of the other reviewers, I've discovered some of the colours aren't great. It seems some of the lighter ones have big pigments that settle in cracks so I avoid colours with too much which pigment in it.

This is a very unique and expensive product but worth it. I got violet edition for Christmas and this is a hot vampy color. You do need a lipliner with this color. You can layer this to get a real intense color. When the gloss fades the stain is still vampy and 1920's. Big tip you need to put a balm on lets say when your doing your eyes and face to moisturize because they can be drying.

By far the best glossy lip stain I've used. Some of the colors are more consistently pigmented than others, otherwise it would be 5 stars for sure! (The bright red is just LOVELY). Smooth, doesn't bleed outside the lip, doesn't get all over your teeth, stays where you want it and comes off with reasonable effort!

For a stain, its nice

Ok so I'm sooooo not a fan of lip stains, but this one is trying to sway my judgement lol. I love the fact that it's still glossy. But I hate that it actually goes on darker than it looks in the tube. Other than that, I really like that even after the gloss has worn off, your lips are still stained. I have shade #9 Rouge Laque, which is a really nice red. I have to use it with a darker berry colored lip liner tho, for the red is too bright for me by itself.

My bestie had just bought it and let me borrow it one weekend when I came in town, and I've been obsessed since. I use No. 4 (Mauve Pigmente) for a deep wine look that still looks natural. I'm fair so No. 4 works perfectly with my skin tone. It's easy to apply, long lasting, and feels like you don't have anything on your lips (so if the wind kicks up you don't have to worry about your hair getting stuck in your lip gloss)!

I would recommend it to ANYONE and I can't wait to try different shades.

This gloss/stain is amazing! The color (#5) that I got is a beautiful soft rosey red. The color doesn't fade, doesn't feather, and it stays all day! The glossy finish makes it a great 1-step. The downsides are the price ($32 here in the US) and the weird texture at first.

I rarely shop products except at mac so its my 2nd time to buy & use YSL product. This lipcolor is actually worked great on me when the artist did my makeup at a store. But when i'm putting my makeup on, I wondered why it doesnt fit on my lips quickly.. Yes it takes time to settle but after a while the color doesnt drip nor fade! and its a glossy finish so we dont need to apply lipgloss on. (and thats the best thing i like about this product because i dont like the sticky lips!) Color pops well too.

Let me just start by saying how gorgeous all of the colours are in this collection!! They really do glide on as a full finish lipstick, whilst leaving a slight gloss and last forever (well not forever... but a really long time!) It's the first "stain" I've tried that hasn't turned my poor lips raisin like!! I adore orange right now so I'm loving number 8, but shade 12 is a lovely tone for summer with its coral/pink sheen!! The applicator is also a soft heart shaped sponge that gives easy and precise application!! Perfect for those long summer days on the beach!! At £22.50 they are on the expensive side but I will always champion YSL for there daring shades and amazing pigment! Bravo little glossy stain..Bravo!! xx

awesome product, but not all the shades are suited for what it does. do not purchase this product online.

i got this on St. Patrick's Day and it's Easter now, so i think i've had it long enough to review. YSL must be employing some really awesome scientists at their R&D labs. :3

but i'm a little dissapointed that it's a bit sticky (instead of sleek and water-like like Dior's lip stuff). it's kind of like the stickiness that i get from my NYX SoHo Glam Collection's lip colors--which i love. the staying power makes it worth €27. the staying power is almost scary, i needed to use eye & lip make-up remover--which i've only ever used for mascara before this. but i do trust that this won't be any more dangerous than getting your lips orange from eating popsicles. because it's very pigmented and you can't just wipe it off you if get too much on, so i use it sparingly. i actually just dot my lips with the lip of the applicator and smudge, that's the only way to get a natural look.

oh, and this smells like a mix of raspberries and lemons! it's... an interesting scent. it's not bad, just a bit... "interesting". 0_o

another thing is: i got the #15 one (Rose Vinyl) which is an awesome shade. i don't regret getting it at all. BUT! the product is meant to be used as anything from a stain, lipstick, to lip gloss. but i think #15 only works best as a lip stain after smacking a full layer off some Kleenex (it's a very natural/fleshy pink as a stain). i attached a photo of what it looks like as a stain. my zero photography skills and i tried our best to play with lighting to take an accurate picture of the shade (i apologize for the exaggerated nostrils, i blame the lens). it does look like a dusty-pale pink with gray undertones on the applicator and in the bottle, but its true color comes out after you press your lips together.

as a gloss it's terrible. after a couple of layers, you end up with a rather milky/creamy gloss, which is super icky-looking. TBH, i don't mind at all because i just wanted a stain/a more subtle look anyway. i'm just saying this in case anyone wants to buy #15 as a gloss (and not a stain). i'm not saying it doesn't do what it claims it does, but some colors aren't suited for doing everything it claims it does--which it does (i think colors like #7 or #11 would work in as all three). even as a stain, it's still a bold color that's good for the evening.

also, DO NOT purchase online! you NEED to walk into a department store and swatch them. for instance, i tried out the #12 which looks very pretty on the brochure YSL dropped me and online (official YSL material and blog reviews alike). it was supposed to be a "coral", but it left a light tangerine stain on my hand, it's darker than i thought, and there's nothing pink/coral about it.