Nourish, thicken and lengthen your lashes – from the inside out. Infused with Peptides that allow your lashes to grow for a longer period of time (as well as moisturizing Panthenol), this formula builds AND beautifies them simultaneously. The large, unique hourglass-shaped brush provided generous distribution.

This very enduring formula is not technically waterproof, but there was zero smudging or running after road-testing it in a hot yoga class. The outer component features a lush swirl motif. This mascara is perfect for anyone who suffers from brittle, fragile lashes, as well as those with great lashes who want to build and strengthen them even more! 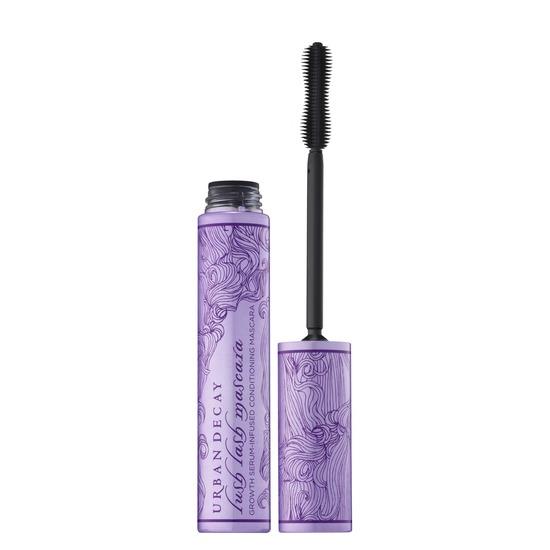 This mascara is amazing it made my eyelashes look natural but super long and pretty!!! The only downside to this mascara is the price. The pretty packaging and good mascara brush and formula is it worth it?

I got this a while ago and I actually really like it. It separates lashes, while curling them....I know....how is that possible!? It is with this mascara. I also have sensitive eyes and this formula doesn't make me itch. It also lasts very well and isn't all over my face by the end of the day.

I'm going to try to keep this as simple and quick as possible. This product lengthens very nicely and separates them too! The brush and tube gives you the right amount of product so that's really nice. This mascara isn't like L'Oreal's where it's super wet and gooey, this one is just right. With the right curl to your lashes, whip this baby on and you have gorgeous natural looking lashes. If you're looking for a volumizing mascara, this is not the one.

i usually stick to mascaras that are b/w $8-$15. i used to think pricey mascaras were not worth it, but i received this as gratis at work & was pleasantly surprised. it gives a very natural/wispy look to my lashes. doesn't clump. doesn't do much with volume, but you can definitely build it without that 'spidery' look. the formula is really light & dries almost instantly so when i do my bottom lashes, the top ones don't transfer mascara to my lids. also, the shape of the brush helps me get to those pesky corner lashes. it's something i would definitely consider repurchasing.

Finally found the one

All other mascara's in the past have always made my sensitive eyes water. I have tried all the hypoallergenic, no perfume mascara out there with no luck until I found Urban Decay. I find the mascara is light enough that my lashed don't clump. I'm actually able to do the bottoms which have been impossible before with other mascara.

Wanted to love it...

I was so excited to use this mascara, especially since it was supposed to help nourish, thicken, and lengthen my lashes. I didn't notice any of that. I felt like it took a lot of effort to get my lashes to do what I wanted them to do. Even after they were dry I felt like my lashes would clump together so easily. I used it for about a month and a half and gave up. Although, I have tried other mascaras from UD and really like them.

Let's start with the packaging. The outside is the standard UD purple that is on so many of their items. The handle and wand are nice and sturdy and in my opinion the perfect length. I can't stand too long or too short wands. The wand applicator reminds me of the Buxom Mascara. However this brush is not quite as big. I found this one much easier to use. It is a plastic brush and easily gets between my lashes for great separation.

As for the formula it's not too thick and not too thin. It is perfect with one coat, but I like to use two. I found it didn't flake or smudge. It also held my curl and looked great at the end of the day. When it was time to take it off I used a dual phase eye makeup remover and it came off perfectly. My lashes never felt stiff or brittle.

Bottom line is I would buy this again. It's $20 for .34 oz. I got mine at Sephora but you can also find it at Ulta and Urban Decay's website.

First things first: I love the packaging so, so much. Now, the actual formula.... it's drier than the mascaras I tend to gravitate to: Voluminous is a lot wetter. This has lash serum in it, and I do think it works. But really, I am OBSESSED with the wand: it's SO SO GOOD and gets ALL of your lashes. I’ve been wanting a spiral mascara wand to try out for awhile as Voluminous’ wand annoys me ‘cause it’s so big, and Illusionist’s annoys me ‘cause it’s so thin. Ever since I got this to try out I've been in love with it. No other mascara I've tried has caught all of my lashes, it's like a hair brush for your lashes.

I feel like it catches all of my lashes and really separates them while lengthening. I won’t say it’s a voluminous mascara, but then it doesn’t advertise itself to be. If you like how wet Voluminous is you might not like this one. Also, Urban Decay Mascara’s tend to dry out VERY fast, just a word to the wise. I'm going to be using this nonstop indefinitely though, seriously, it's amazing.

The eyelash version of Skin So Soft :)

My eyelashes have never felt softer! it feels like I literally used conditioner on my lashes. I have plenty of mascaras and none do the job like this one does. Lush Lash helps lengthen your lashes while it conditions them too, helping to bring back the health in your lashes. As we all know, many mascaras leave your lashes feeling dry, brittle and flaky...NOT lush lash! go ahead buy it and feel the difference...I dare you ;)

This mascara I fell in love with. The reason....it does no flake. I wear contacts and a lot of mascaras out there flake after they dry. I love the wand especially because it gets to all of your lashes leaving none of them untouched. This mascara is nothing like the others. All mascaras that I have tried leaves my eyelashes stiff. This on the other hand does the job of lenghening and leaving them soft. This is deffinitly a winner for me : )