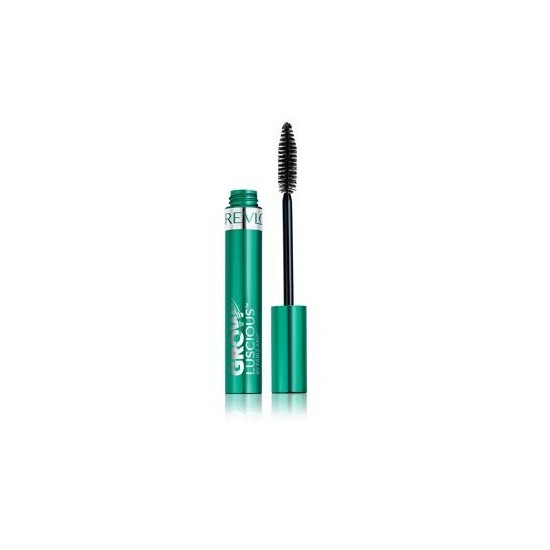 Ever since I was little I have always had naturally long and voluminous lashes, but after giving birth to my daughter in October 2010, my lashes looked thin and short and my heart did break a little because I was scared they would never get back to normal. So, I began to look into lash conditioning or lash growth mascaras. I quickly found out about Revlon's Grow Luscious Mascara, and during my Christmas shopping I picked up a tube of Blackest Black at my local Target for about $7.99 (initially I was expecting a lot from this mascara because that's a bit expensive in my eyes!).

First Impression: I loved the large brush because I'm all about giant mascara wands/brushes! But, I actually hated this mascara. I used it about 5 times, off/on during a 2 week time period, and quickly put it to rest in my makeup case. Like I said before, my lashes were short and thin, and this mascara just made them stand out even more and it didn't add any volume or length. I did however like the consistency of the formula, the rich black pigmentation, the fact that it didn't flake or smudge, and that it didn't clump my lashes together.

Product Revisit: After the new year I began to use the Revlon Grow Luscious Mascara again because my other mascara (Cover Girl Professional Super Thick Lash Mascara) ran out. I did dislike it still, but since I had nothing else to use, I toughed it out and actually wore Ardell Demi Wispie lashes to hide my pathetic natural lashes. After using the mascara for about a month, I began to see a slight difference. My lashes started looking longer, but not fuller at all - just wispier. So, I kept using it to see how my lashes would end up looking after using a full tube of this mascara.

Here's a before/after photo of my lashes in January and then again in April (attached) In January I had worn about 4 coats of mascara to get them to look their best. My lashes were thin, short, and pretty sparse. The January lashes have a LOT of mascara on the ends to make them look longer - they really weren't that long ;) In April I'm now wearing about 2 coats of mascara to get a full coverage on my lashes. My lashes are longer and I have even noticed new lashes are growing in between my lashes making them looking fuller. Even my bottom lashes are fuller and longer!

Final Review: My Revlon Grow Luscious Mascara has made many appearances in my previous makeup looks and tutorials. I have received a TON of compliments and questions about my lashes in the last month or so, and it's all due to this mascara. I feel that this mascara has conditioned and rejuvenated my lashes back to there original state! It's truly amazing and I'm so grateful for this mascara, haha, it's well worth the $8!! I recommend this to people looking to enhance their lashes, it takes a while, but regular use of this mascara makes a big difference.

TIP: I have recently found this mascara on WalMart's website for under $6!

I'm one of those people that don't really believe the ads on TV or in the magazine that I must say that I am so glad that I gave this a try. I've only been using this for about 2-4 days and I've already noticed that my lashes look a lot longer and a lot more volume to them & thats without any mascara. The brush on this is amazing. It's big so it makes the application so easy. It adds the right amount of volume and length to my lashes. Doesn't clump up like some mascaras do. I absolutely love this.

I always said that nothing could be better than my Rimmel Sexy Curves Mascara. I was tempted to buy this mascara after seeing the commercial. OMG people!!! This stuff WORKS! My lashes appear to be longer, fuller and just look a lot healthier. I also love that this mascara doesn't leave my lashes looking cakey. Very Very happy with my purchase. This will always be in my basket of favorite mascaras n_n I have been using this mascara for a week now and I love the results. Best Mascara so far =)

Given all the hype surrounding this product, my curiosity got the better of me, and I decided I needed to see what the big deal was with this product. I am so glad I did!

The brush of Revlon's Grow Luscious Mascara is long, and tapered, so it's easy to get the inner and outer lashes, as well as the lower lashes, without making mistakes. The formula is a bit on the wet side, but not so much that it weighs down my lashes or takes longer to dry. The black shade does a wonderful job of coating my lashes in rich, black color.

Revlon's Grow Luscious Mascara doesn't clump, flake, or smudge throughout the day and night, and isn't difficult to remove. It does a fantastic job of lengthening and separating my lashes, while filling them in for a bit of added volume. I would not say this is a "volumizing mascara", but I will say the Plumping version definitely does help your lashes become fuller!

My lashes were short, thin, and spaced out prior to using this product. I had tried L'Oreal's makeup remover (green bottle), and had some result, but I have really noticed a difference since using Revlon's Grow Luscious Mascara. I'm a skeptic, and with all of these lash-enhancing products on the market, I really wasn't expecting this one to perform, but it does!

My lashes are longer and fuller since having used Revlon's Grow Luscious Mascara. I am so pleased with the results, not only with how it wears as a mascara, but with how my lashes look on their own thanks to this mascara. I highly recommend Revlon Grow Luscious Mascara if you're looking for a great day-to-day mascara, but especially if you're looking to enhance your lashes!

I am quite the mascara whore, so it says a lot for me to say that a mascara is good. But this one is amazing. I am absolutely in love with it! I find it super comparable to my Tarina Tarantino Fleur De Lash, and it's good for my lashes. As for the growth claims, I have noticed darker and thicker lashes that don't shed as easily. I absolutely am in love with it and I will continue to purchase again and again. I can't wait to pick up the Plumping formula.

I love this mascara so much! It is thickening and lengthening. I also think it says what it claims to do, by helping you grow thicker lashes. I have seen a difference in mine. I love the large brush, it reminds me of benefit's bad gal lash, which I also love. I love the formula of this mascara to, it isn't clumpy and it stays on all day without flaking. The packaging is super cute and shiny which is a bonus! I might never find another mascara that I like more. It is also very affordable. Where I live, it's about $10 which is great because many high end mascaras are $20-$30 and they are'nt evern as good.

This mascara was my homegirl for a month before it dried out and started clumping up in the tube. Despite that it has served me well. It also gave me long luscious lashes with the use of a lash curler. It seperated my lashes and never made them look clumpy, and it was perfect for all day wear. I only had to use one coat to get perfect lashes. And I love the huge brush on this. Revlon mascaras always have the best mascara brushes! <3

As a mascara, it does it's job very well. It separates the lashes and adds volume and a bit of length and I love thickening it for smokey eyes or "sexy eyes". I've had this mascara since it came out, even tried the other version they make (which is crappy in my opinion), and it's still my go-to and I'll always have it in my makeup case. As for lengthening, I have noticed a pretty good amount of difference in the length of my lashes.

Only mascara I use.

I've been using this mascara since shortly after it came out and I love it. I really like the formula because it isn't hard and cakey. It's a nice light flexible formula and it separates my lashes and gives them tons of volume. As far as the growth enhancement, I did notice some difference. They're a little longer and there is definitely more lashes/volume. People can't really expect this stuff to make your lashes grow in like false lashes or something though. That's just ridiculous. The ads clam that it will help "enhance your lashes natural growth cycle" not give you lashes like Elizabeth Taylor.

I recently purchased this mascara in Basic Black, and though I haven't noticed a change in growth in my lashes, I definitely noticed this formula isn't as damaging to them as other mascaras seem to be for me. I also love the fact that you don't need to put on layers of it to acheive the full lash effect. While I did purchase this for the "growth" aspect of it, and as I said before there isn't one, I would still repurchase this.