Philosophy Cinnamon Buns is gentle enough for everyday use. This shampoo, conditioner and body wash has a unique, long lasting cinnamon fragrance. It works great as a bubble bath, and cleans and conditions in one step. 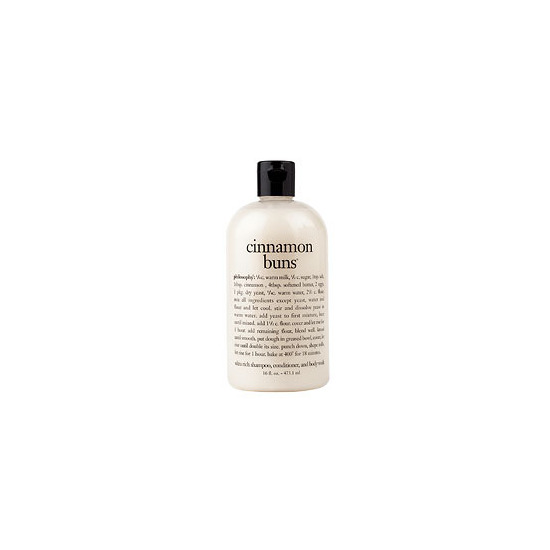 I don't care if the actual product works the same as $5 Herbal Essences. THE SMELL. IS. AMAZING. I'm tempted to eat it hahaha. The smell is strong in the shower but is delicate afterwards, which I appreciate b/c i don't want to be a walking cinnamon bun. I love this so much.

I love Philosophy shower products. Cinnamon buns is no exception. It lathers wonderfully. The scent is awesome, it doesn't last long after the shower, but personally that is fine. I wear perfume and I don't think a sweet foodie smell would mesh well with some of my scents. But it does leave your skin soft and smooth and not dried out feeling.

Great for Body Wash, Not So Great for Bubble Baths.

I have two of Philosophy's 3-in-1's, one of which is Cinnamon Buns. The fragrance really does smell of homemade cinnamon buns! It's not strong, and doesn't linger on the skin, so it won't compete with any perfumes/body sprays you use after showering.

Cinnamon Buns' lather isn't very bubbly - not like some other body washes/bubble baths can be. It does lather, but nothing I'd call "rich". As a body wash, it leaves my skin feeling soft and moisturized. As a bubble bath, the bubbles don't reach anything higher than a fizz, and they dissipate almost instantly, so I definitely don't recommend it for that purpose. I haven't tried Cinnamon Buns as a shampoo because my hair is color-treated, so I can't report on its performance there.

All in all, Philosophy's Cinnamon Buns 3-in-1 is a yummy scent, and works wonderfully as a body wash, but I wouldn't repurchase. While you're only paying $1.00 per ounce, $16 for a cinnamon buns-scented body wash that doesn't do anything special seems like a waste to me.

Wish I could love it

But I just can't. Before I tried philosophy products, I was so excited to try them. I heard tons of good things, and saw that they have a huge selection of scents. I received a set which included the body wash and lip gloss and the smell was incredible. I wanted to bathe in it all day! The lip gloss, was the messiest, stickiest lip gloss I ever used. It was so thick and sticky I couldn't stand using it. The smell was way too overpowering as well. It felt absolutely disgusting on my lips. The body wash smelled amazing, made my skin feel good and clean in the shower, but once my shower ended, so did all of those feelings and smell! Literally, once I towel dried myself, I couldn't smell it anymore. I tried it as shampoo and it made my hair smell good for a little bit, but again didn't last. Didn't do anything for my hair either. It's definitely not worth it, especially for how much philosophy products cost. It's a waste of a decent amount of money.

Great smell, but fragrance doesn't stay on the skin after showering

I was looking for a body wash that had a unique smell and that the fragrance would stay on skin after getting out of the shower. Cinnamon buns by Philosophy smells incredible; it smells as if you had just walked into a cinnabun store.. Unfortunately, the smell can only be enjoyed in the shower and doesn't stay on the skin after rinsing. In the shower, I apply a dime size of "Cinnamon buns" to a loofah and get a lather that can be used to wash my whole body. I like that the bath gel/shampoo has a great lather and doesn't irritate skin. In comparison to Bath and Body Works and Victoria's Secret body washes, Philosophy's Cinnamon Buns is more expensive and doesn't leave a trace of the fragrance on skin after showering. I like that "Cinnamon Buns" can be used as a shampoo and body wash and that it lathers well. I wouldn't buy Philosophy's body wash again because it is more expensive than Bath and Body Works/Victoria's Secret body washes and the great smell of cinnamon rolls is no where to be found on the skin, after showering.