This line-reducing concentrate is formulated for the eye area and contains a high concentration of 10.5% pure vitamin C (L-ascorbic acid) known for its affinity with skin and its powerful ability to improve the appearance of skin aging. With haloxyl, this formula helps to reduce the appearance of under-eye dark circles, helping to brighten the overall eye area for a fresher appearance. With continued use, this treatment helps address some of the more serious signs of skin aging with a significant effect on sub-orbital wrinkles and crow's-feet. A high dosage of vitamin C, when applied topically, has been shown to have a multitude of positive effects on the skin's appearance. Kiehl's chemists found a way to formulate and stabilize pure vitamin C at high levels in a safe and highly efficacious form to maximize the benefits of the ingredient. 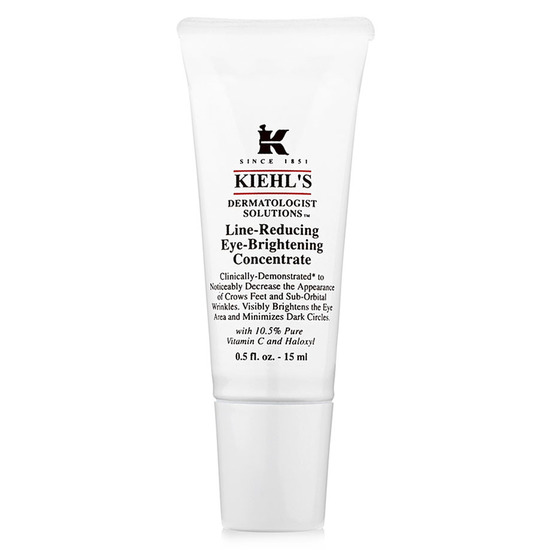 Very pleased with this eye cream! I've finished an entire tube (the 15mL lasted exactly between April 29, 2014 to September 3, 2013—which is roughly around 4+ months). It expires at the typical-for-eye-creams 6 months , but I think mine started oxidizing around 1.5 month ago? I just changes colour slightly, but it didn't smell funny or change in texture (used to take that kind of thing for granted before I tried Juara Skincare Sweet Black Tea Eye Creme).

This is awesome. My eyes tend to look really fresh (and hopefully it will prevent fine lines/crows feet in the long run). But my main issue is really dark under-eyes and this sort of killed my inner-panda (no offense intended to pandas and raccoons! It's just that this kind of thing us unnatural to Homo sapiens, you see). It's very important because as much as I love YSL Touche Éclat is just a highlighter (and under minimum light, the reflective particles are useless). Now under-eyes only darken when I'm cold (like when I'm on the shower and such). The eye-cream is amusing when you apply it, it feels slightly warm (that's probably the Vitamin C at work). Interesting.

Of course the ultimate test of an eye-cream is the FIFA World Cup (which took place in Brazil time this year, I was watching from Southeast Asia). I'd take a one hour "World Cup nap" at ~23:00 be awake at ~02:00 and would sometimes only be in bed at 05:30+ (depending on whether penalty shootouts are necessary) and I was bright-eyed until the World Cup final. Hm.

I am a teensy worried, tho, because my skincare teacher says that human skin tends to become "immune" to products after a while, so you have to switch/swap products until your skin sort of "forgets the ingredients" (for instance: juggling between salicylic acid with benzoyl peroxide or tea tree). And I don't know of any other eye-cream that's better than this (it's in the same price-range as Orlane Anagenèse 25+ First Time Fighting Care Eye Contour, but my skin got immune to that so much faster). Any recommendations? Products that you'd consider an equal to this? TIA.

PS: There seems to be an error with this product's Beautylish profile, because I could not locate the "WRITE A REVIEW" button. So I had to manually type in "/review" into the URL for the form to load for me (editing is also seemingly 'disabled' on some products, FYI). Glitch?

I love this stuff! It's like you can really feel it working. I work 2 jobs, I'm in school, I work out, and there are definitely many nights where I can only sleep for 5-6 hours a night. I'm working as a nurse and after my 12 hour shift, I'm really tired. I never used to have dark circles/lines under my eyes, until my 27th birthday. I've been doing some research online, and I came across this creme People were calling it a miracle Creme, and it really is! You can literally feel it working, and I noticed results in two days! I apply it as part of my nightly and daily routine. It is definitely worth the money!