Shipping to the US

A Show Girl’s secret to sparkle and glamour! Put a few drops of glitter glue in cap, dip brush in, then dip into Show Girl loose glitter for a true show girl sparkle on face and body. Apply to eyelids or any other skin surface. 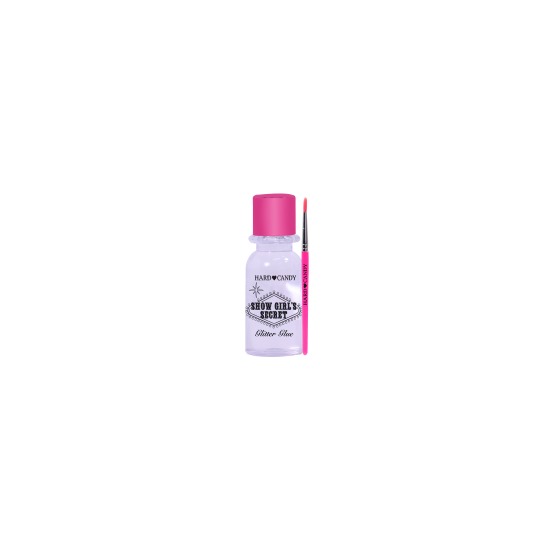 If you're a fan of glitter, you absolutely need this. Dribbling some onto a brush before dipping into the glitter itself proves the easiest for me. No flaking, no budging, this truly allows you to build a look that will adhere from dawn until the next sunrise. Invest in a flat brush that fits your eye shape, and you'll be good to go.

i was sugguested to try this and i must say it was love at first try. esp if you are like me a broke girl on a broke budget lol. i loved l.a. colors lose glitter but it would never stay a dab of this and you are good to go for all day and all night. this is one of my fav products ever would reccomend to anyone using loose eyeshadows

I picked up this glitter glue because I really love Hard Candy products and because it is so affordable I figured I have nothing to lose. I have to admit I really love this glue. It makes my glitter stay on all day and night. It's spill proof too. I also like the brush that comes with it. It's very thin with a nice point. If your looking for a good glitter glue check out this one from Hard Candy.

I really liked this product. Seeing that it was only $5-6 at wal-mart and it definitely did the job I am very pleased. I have seen a few people from people who weren't very impressed and I think it could be because they aren't following the instructions to a tee. Because when I tried it I was using my own brush and i think i tried putting the liquid on my eye first then the glitter found that these were both no-nos. First off the little synthetic brush they give you works with it very well and you must dip the brush in the product first then pick up the glitter and apply it carefully. It stayed on all night for me and hardly had any fallout. (There was a little but barely noticeable) also when I applied it it didn't smudge the eyeshadow I had underneath the glitter, didn't crease, nothing bad happened. VERY IMPRESSED!!

Hard Candy's Show Girl's Secret is a liquid glitter "glue" meant to be used with Hard Candy's Show Girl glitters, which I have not tried. Hard Candy is a former high end brand that can now only be purchased at Walmart. How the mighty have fallen. This product is made in the USA and is not tested on animals. I retails for $5 for .86 fl oz and includes a brush. Show Girl's Secret comes in a clear, hard plastic bottle with what I think is a metal, pink cap. Actually it might be that really hard plastic with a metallic lacquer on it. It's probably that. Either way, it's pink. The cap features the Hard Candy logo and a small heart, which is a cute detail. The bottle features a stylized version of the Las Vegas sign, featuring the words "Show Girl's Secret". Packaging is pretty cute, though some argue it's functionality. The top of the bottle has a dropper. A lot of people complain that they have a hard time getting product out, but I've developed a technique. The key is to hold the bottle at an angle and give it a small flick. This'll dispense one perfect drop. Maybe this is the Show Girl's other secret. Either way, my technique is fool proof. You're meant to put a few drops and mix the glitter in there, or directly dip the brush into the dropper hole. Either way isn't particularly hygienic, but it is a great way to get a ton of glitter into the liquid, forever contaminating it. I much prefer to put a drop of Show Girl's Secret directly onto your brush, and going from there. I'll warn you that this'll stiffen the bristles of your brush if you let it dry that way, but a quick rinse will fix it. Hard Candy included a small brush with Show Girl's Secret. It's pretty useful for applying glitter as a liner. The brush is pink, with pink, stiff bristles that come to a point. It's quite small, and I tend to lose it in my brush jar. Show Girl's Secret is a clear, thin liquid that looks like water and has about the same viscosity. To be fair it's pretty much just a mix of water and a few types of alcohol. Something more DIY oriented girls might want to make at home. Straight out of the bottle it feels just like water, but as it dries it develops a slight stickiness, and thickens. It eventually dries down to a glue like residue, there's a bit on the side of my bottle, its kinda gross. Used to adhere glitter, Show Girl's Secret works pretty well, but not how I expected. I expected a denser, more solid application of glitter. I guess I watch too much xSparkage. This glitter glue gives a much better application of glitter, and makes the process much less messy. It doesn't entirely prevent fall out, but it prevents a majority of it. I need two coats of glitter to get my desired effect. Though I don't see any mention of it on the label, I assume Show Girl's Secret can also be used as a mixing medium for pigments and the like. I love using it for this because it gives a beautiful foiled effect. However it can cause the pigment to get kinda bunchy and hard to work with if you don't use enough glue. It's something you have to play around with. Show Girl's Secret is only an application aid, it doesn't make shadows or glitters last longer. If you touch glitter you applied with this glitter glue, it'll still come off. You also still need to use a primer for your shadows or glitters. I get a lot of use out of Show Girl's Secret, more than I thought I would. It vastly improves the application of glitter while decreasing fall out, and it works great as a foiling agent. This was my first Hard Candy product, and it has me interested in trying more. It was also my first glitter glue, so forgive me if this wasn't the best review for it. I definitely recommend Show Girl's Secret if you're looking for an affordable glitter glue or mixing medium.This is the only one I know of from the drugstore level. I'll likely repurchase this product, it gets the job done for a good price.

i didnt like it at all glitter fell right off my eye and spread on my face with in an hour.. mind as well buy glitter liner! it seemed too liquidy and not easy to work with..i bought it to try and just wasnt impressed!!!

I used to love Hard Candy and was wondering what happened to the brand. Spotted it in Walmart and they have some good stuff. Made in the USA, too!