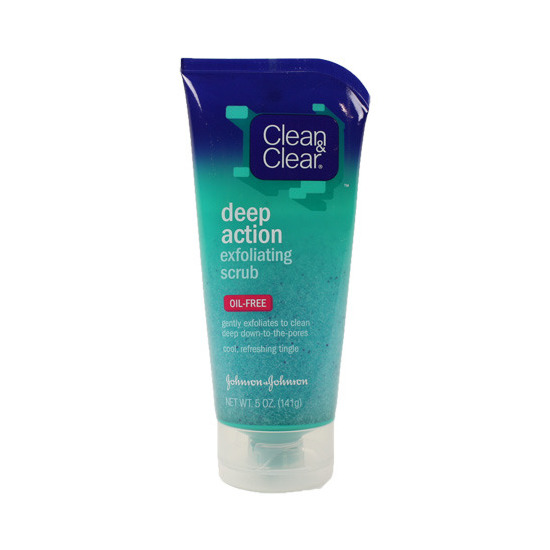 so when I was 11 I had really bad breakouts all over my nose and cheeks and this saved me💅I love all clean and clear products and If I had to choose any skin care product it would be hands down Clean and Clear.

has the best smell

this is probably my favorite exfoliator, the smell and the feeling is an A+ from me! It feels very cooling and tingling on your face which I love. it feels great and over all is a great exfoliator.

I LOVE the way this smells. A lot of washes smell like alcohol, but this smells good and feels so refreshing on my skin. Also, I have sensitive skin, but the exfoliants aren't harsh, so they don't bother me. And another plus, it doesn't make me break out!

Love it so much

I use this face scrub during the summer. I use it everyday, and yes it is very abrasive, but my skin needs to be exfoliated everyday. I love the tingly feeling i get when I use it. This product works best when you have already taken your makeup off, otherwise it just kinda smears it around. It is not a makeup removing facial cleanser.

I'd say this is a pretty good scrub but Mary Anne M. has described this pretty well. I've come to mistrust cheaper scrubs because I feel like it just scrapes away breakouts yet also pushes crap back into your skin, compounding over my comodones and doing nothing for the subsequent dark spots. I think the beads in this are a little more abrasive than my go to and guilty pleasure- Clean and Clear Morning Burst Skin Brightening Facial Scrub with lemon, papaya and caffeine. I didn't really dig mentholated face products before but they've since grown on me with this cleanser. It has a semi masculine/androgynous scent which makes it a crowd pleaser with my bf. I prefer the Morning Burst to this, but this is nice to change it up, although I'm growing ever wary of drugstore exfoliants for many reasons. But of course I'm a sucker for the packaging, perfume and cool blue dyes within the scrub!

I love this product because i usually use it in the morning and . At night it makes my skin feel so smooth also take all the dirt away i like how it has the tingle to it .

Abrasive & Mentholated—Skin Irritation in a Tube

This was one of the cheapest drugstore exfoliators I could find that I heard was good, so I kept using it continuously especially because I kind of liked the minty cooling effect that the exfoliator had on the skin while scrubbing. However, the scrubbing agents (I believe these were plastic beads...?) were rather large and rough on the skin... no kidding about deep action, but maybe too deep! I always left the sink with a pink-ish face because the scrub was so abrasive.

I later also read that menthol is a skin irritant, which is the ingredient in this scrub that causes the cooling effect, but this has no actual effect of cleaning your skin. So I dropped the rating to a 2 instead of 3 despite the fact that I liked the tingling feeling, because it makes no sense to include an ingredient in a facial care product that would irritate facial skin!

I currently use Neutrogena Naturals Purifying Pore Scrub, which I enjoy much more than I did the Clean & Clear scrub since the scrubbing agents are much smaller and gentler on the skin, and for the most part there aren't any skin irritants included in the ingredients like this one does. Never going back to it anymore!

I used this about 4 times and each time my skin broke out but my skin turned out soft so I think its not worth buying as I personally thought it isnt worth it! but Ill give it average as it made my skin soft.