This new, easy-to-apply hair color formula begins as a liquid, then applies as a foam. And it puts dimensional hair color right at your fingertips. 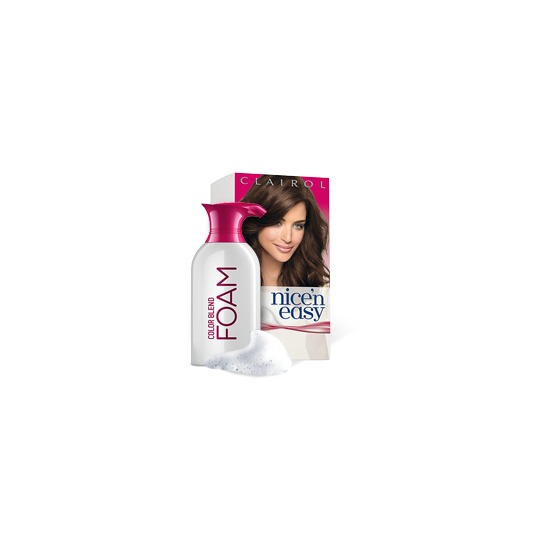 I went to the hair salon to get highlights over the summer and when Fall came around, I decided to go a few shades darker than my hair was. I really liked it for a bit but after a couple days, the color started coming out on a few strands and you could see little blonde streaks in my hair where I had my highlights.

This was the first foam dye i had ever used.. I was skeptical about it because i didnt think that it would color every bit of my hair fully , but it did! I was very surprised. This product is very effective and inexpensive. I like it !

My hair color is awesome,even,and long lasting. Natural looking,quick, easy to apply and perfect for first timers. However the smell is awful! I gagged from the scent. You can get better color with less scent.

ive used almost all drugstore hair dyes....this one isnt my favorite...wasnt the worst either....but left major like black flakes of the dye which i dont understand. ive dyed my hair several times and never had that problem until this dye, highly disapointed

I really like this product. The foam stays put and does not drip! With cremes, I with out fail get color on the back of ears neck etc... But with the foam no drip! Mixes quickly as well. My hair is naturally Black. Alot of hair colors,are too black,and do not look natural but this product looks natural and very nice! Excellent gray coverage!

I loveeeee foam always will pick it over normal formula dyes :) 5mins & done :) i do mine by myself so much easier especially the colour pay off everyone assumes ive paid a hairdresser to do it!!!

i really really love the easiness with this product and i love how well it really worked. it is easy simple and looks great. The only problem i had was it faded a little quick. and left my hair with a tint of my previous color. I liked it though. so i didn't mind. overall i use this from now on.

To be honest I was impressed with this product! It seemed to cover all my hair evenly and after it was applied my hair really did have a nice shine to it which was a major plus! I would definitely recommend this and i would definitely buy it again!

I love Liese's foam haircolor, so when I saw this at the drugstore I almost cried for joy! Foam haircolor is the best thing ever invented, and so easy!!! The only reason I rated this as average and not great was because I had been dying my hair with Manic Panic and wanted to go back close to my natural haircolor, so I picked out Medium Ash Brown...well, I left it on the exact 20 minutes it says to in the directions, and I turned out with seemingly black, but brown under light hair. So, it's a lot darker than I had expected, but my cosmetologist friend blamed this on my having bleached my hair before...had I known that, I'd have picked out a lighter color, but it doesn't look terrible! I'm just hoping perhaps it'll fade to a more medium brown instead of this inky black-brown. :L But you know what? At $8 I can't really complain that much!

One thing though: When it says to shake three times, I actually just tilted the bottle upside down about four or five times, then back rightside up to mix the color (like in Liese's bubble hair color instructions) instead and that way it'll stay a liquid in the bottle! If you have any foaminess in the bottle, the foam seems to degrade and go all liquidy after you apply it to your hair, so...that's my tip!

Obviously hair dye doesn't smell too great..but this smelt even worse than every other hair dye I've used. The color also faded REALLY quickly. It faded about 5 shades since I last dyed it..and I've only washed it a couple of times. Kind of disappointed.