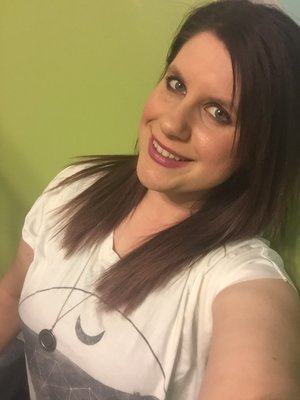 See all of Stephanie G.'s photos

It's unfortunate that being bullied and such is what we have in common but I do enjoy seeing your comments and we are quite alike Haha :)

I think if we lived near each other we would be very good friends!

There's no hard feelings at all, promise! I understand that both sides had valid points and that's what I was trying to get across, but instead of feeling like they listened at all and just didn't agree, which is fine, but I got belittled and dismissed completely. Which I completely hate people doing, its basically just "I don't care my opinion is right no matter what" with a hand in the face lol.

And honestly on that other thread, as someone who has been in therapy for 10 years now, and during school got bullied a lot, it rubbed me the wrong way. I got a bit upset. As I said in it I saw the intention, and I loved that, but it took me years of therapy and teaching myself self love and tons of tears, and some people in there, who stated clearly that they don't have self esteem issues without makeup, were acting as if it were a cure, which it wasn't. It made me personally feel worse, since I struggled for years, it was like they were dismissing it and acting like all I had to do was decide to love myself. It's not that simple, and I just wanted to state that, especially since it was about her friend. If someone came up to me and just said to feel beautiful without makeup, I would tell them the same thing, because it's a great intention, but it's not really helpful a lot of the time. And I had to reread it, because honestly I didn't remember it was you, but I've got a shitty memory lol. But I'm glad it helped you feel a bit better, but it honestly made me feel so bad about myself. Like it was a good week and it went from like a 8 to a 3 within minutes of reading that post. Like I remember exactly how I felt, that's how much of an impact it made, and then I got told I was being negative and basically to just shut up, when threads before that, especially when they had to do with mental health, like that one, the mods always said something nice like "glad everybody could share and contribute their thoughts, everyone has their opinion and it's all valid" even when it got very negative (the one that comes to mind it was about plastic surgery and self esteem, and there were a few posts that were very negative, not to anybody but similar to that thread) and they were praised for participating and sharing their opinion. Whereas I did and got told to stop being so negative. So I got quite bitter after that. And I was upset and emotional after reading it so I can see how my choice of words come off badly, but honestly I was trying not to show that I was very upset over it lol. I always type something while upset and reword things to sound as neutral toned as possible, and sometimes I overdo it and it backfires and just turns cold sounding. I apologize for how long this is, I feel like I've written about novel Haha. But I just don't want you to have a bad thought about it, I really don't mean to come off that way. I am really bad at judging my own tone in writing, meaning for it to be positive and then reading it a few days later and going "oh that's worded poorly it's written like it's meant to be rude" and I really didn't intend it. Which is why sometimes I include like 5 smileys lol. But anyway I'm going to stop typing because this is super long and I'm about to go to sleep, but I really hope you understand my view on all of it, and how I really don't want to offend you or anyone else, it was just how things felt to me and I get emotional sometimes too, which unfortunately 2/whatever emotional posts on this site has ended poorly with the mods/other people. But yeah I just hope you understand what I'm saying and I hope I didn't repeat myself too much. The app definitely doesn't do well with writing big paragraphs, It never let's me scroll up or view more than a line at a time. I hope you have a good evening/day depending on what time it is where you are and I really hope there's no harsh feelings at all :)

The thread is closed now but I wanted to address it, I often am blunt but I don't mean it in a hostile way, and most of my posts contain lots of smileys because I don't want people to take the bluntness as bitchiness. So I honestly want to understand how you think my posts come off as hostile? Because I really don't mean it that way at all. A little bit on that thread, but when you're being belittled it's not really expected to be super cheery and kind.

Thank you for your kind words I'm so sorry about your freind and I truly mean that because ill be honest I didnt think I was going to make it especially after the first round of chemo didnt do nothing but piss my cancer off then they put me on this strong chemo that requires me to stay at the hospital for 4 days because they have to watch my blood count and my doctor told me if this chemo dosnt work then we are stuck on what to do :/ we didnt think I was going to make it which is a hard pill to swallow but you know what I kept pushing and I know even those who pushed until death it dosnt make them any less stronger cancer is vicious and stupid I hate it soooo much!!