Create a precisely defined eye with this liquid eye liner by L'Oreal Telescopic. 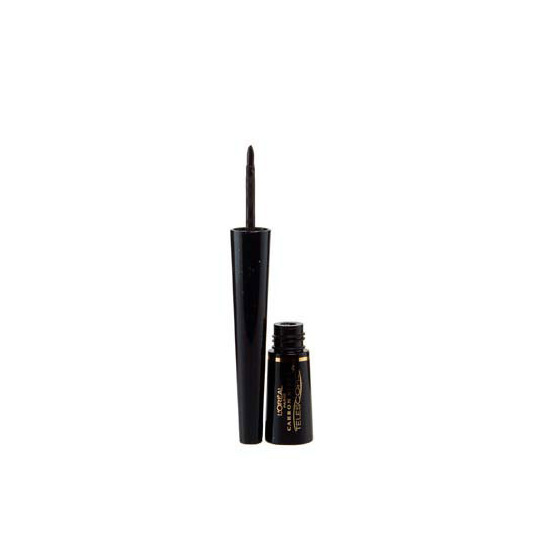 Love Loreal eyeliners because they stay on and easy to apply. This is my FAVORITE! I have in dark brown and I love how easy it is to apply, the richness of the color, and the wear. It stays on all day with no smudging which I've ran into that problem with other liners. This is something that stays in my makeup routine

Great price, amazing deep color, runs smooth across eyelid, never flakes, doesn't stain your upper eyelid, and the list goes on! I love this eyeliner I've tried many other ones and none have done what this one does for me. I usually go get it when they have the buy one get one half off at Walgreens because I will always go back to this one

This liquid eyeliner is THE BEST! I had been using MAC liquid eyeliner for years and it always flaked off and smudged by the end of the day. I assumed this was normal for liquid. Then one day I decided to try this because it was half the price and was amazed by the quality. Lasts all day and if it does smudge a little you cant even tell.

Finally! An eyeliner that lines my eyes beautifully and doesn't cost an arm and a leg.

I seriously LOVE this eyeliner! If you're like me and have problems applying eyeliner cleanly, or have what I call 'bumpy' eyelids, this is the PERFECT liner for you. Its got great color, goes on practically all by itself, and is virtually smudgeproof when you go over it with either powder or shadow. I cannot say enough about how much I love this liner, other than, go get it!

I really really really wanted to like this liner. It was affordable and usually I'm more than very impressed with Loreal's pencil and other liquid eyeliners. But this product for me is just such a miss. I bought this in hopes that color would be blackest black and, much like the packaging suggested and that I would have a smooth application due to the felt tip pen. (which is really, an idea that I generally like on most liners) But I was turned off instantly when I opened it up and went to use it for the first time, (after shaking, thoroughly may I add) and residue was just dripping off of the tip, down the wand and on to my hand. I assumed, I hadn't shaken the product enough, however after shaking it again, it was still very verrrry runny. Application wise, again, I was disappointed. The color appeared as perhaps a charcoal greyish-brown (at best), nothing close to resembling the 'blackest black' I was expecting. I think perhaps the reason I'm so disappointed with this product is because I had such a high hopes for it, and I wanted it to work so badly. Overall, Loreal is an excellent, reliable, drugstore brand of cosmetics, however this product (FOR ME) was just very disappointing. I most likely will not be repurchasing, however I might give it go due to the fact that perhaps maybe I received a skunked product. But honestly, if I was in the market for a reliable liquid liner, I would just splurge the extra 10-15 bucks, and go to Ulta or Sephora to buy another liner that suits me better. -I attached a picture just to show how poor the color application was for me, on the left is the liner dried for about a minute or two, and on the right is the product immediately after application. (ignore my veiny, bony, old man hand)