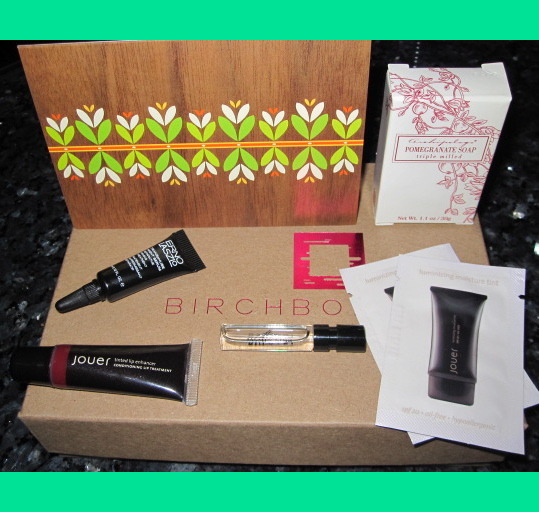 I opened this and said aloud, "Wheres the rest?" So for May I received a note card (!) Erno Laszlo wrinkle fighting night serum. Jouer 'tinted lip enhancer' a neutral brick red called Shiraz that does not stay on for very long. Actually the colour dissipates so quickly I wonder if it is supposed to. Mon Jasmin Noir by Bulgari. Someone at Birchbox must like jasmine, it's the second month in a row that I have received a jasmine based perfume sample. I really like the smell at first but became a little overwhelming after a while. (I wear Light Blue by D&G) There are 2 sample packets of Jouer Luminizing Moisture Tint and the (apparently) coveted Archipelago Pomegranate soap. It's a deeper smell than what I expected. Pom is usually expressed in a light fruity way which cheapens the aroma. This soap is deep. Rich. Like an aged wine. I was a bit terrified to use it; bar soaps are so drying. But I was clean without being squeaky/filmy clean. And my skin was soft, not like after other bar soaps, where I feel like I was starched by a dry cleaner. The aroma of the soap didn't stay on my skin after the shower so I didn't have to worry about it altering my perfume.

Bottom line: if this was my first box, it would be my last box. I could get more samples walking around nordstom, for free. I see all kinds of mixed chatter about this service and am starting to think the demand has outgrown the supply and they A) don't see it or B) to greedy to care. I was ready for the June box on May 5th.

wow, they really send out sample size of sample ^0^