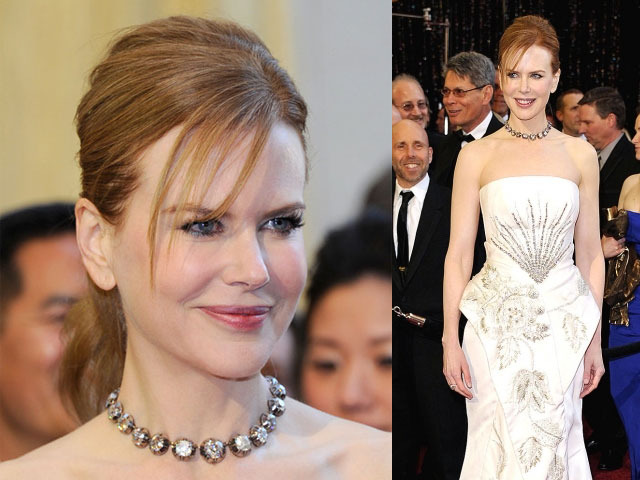 To prepare Nicole’s skin, Angela Levin used Chanel Sublimage Essential Regenerating Cream all over her face and neck, as well as on her shoulders and decollete. As a base I used Chanel Vitalumiere Fluid Makeup in Ivoire.

Red Carpet Pro Tip : To pull together your makeup look, use the same shade of lip color on your cheeks, dabbing the shade on the apples of the cheeks with you finger.

For the eyes, Levin used the dark shade from the Chanel Eyeshadow Duo in Bleu-Tendre feathering the shadow inward, creating a dark outer corner of the eye for a bit of a up 60′s look. Then she used the taupe shade in the Chanel Quadra Eyeshadow in Stupendous in the inner corner of the eye. From the Chanel Quadra Eyeshadow in Winter Nights, Levin used the medium, silvery taupe shade and swept it on all over the eye using a round motion, blending all the shades together. On her eyebrows she used the Chanel Brow Definer in Blond Clair, and two coats of Chanel Inimitable Mascara in Noir, on top and bottom. Underneath the eye Levin used a Sephora Nano Eye Pencil in Silver Green.

For her lips Levin chose to use Chanel Rouge Coco Lip Colour in Magnolia.

David always begins every red carpet look with clean hair followed by applying Couture Colour Pequi Oil Treatment to her entire head. It is derived from the Pequi fruit, known for centuries as the beauty secret of the Amazon Rainforest. Once applied, David is amazed at how Nicole’s beautiful red hair color looks so fresh and vibrant.

He then sectioned off a bang and cut a French fringe to frame the face. Next, he blow dried Nicole’s hair with the IT &LY HAIRFASHION Ionic Dryer that supplies super-fast drying power along with a large round brush. At the bang area, he gently bumped the ends under. After the hair was dried, he applied an additional amount of Pequi Oil to create a smooth and shiny surface. To begin the “Playful Ponytail” up-do, he used his hands to sweep the hair into a ponytail creating a slight bump at the crown and securing with a band. To finish the French fringe, David added additional Pequi Oil to his fingers to define.